Act now! There has simply never been a better time to buy at Roda Golf
READ WHY and do not miss this opportunity!

Finally Stuart from Calida International finds the time for a fantastic game of golf, with fantastic company. Stuart sent us this "diary entry", that is sure to make any owners languishing in the rainy UK a bit jealous! Click here to read the article. Read this article, and optionally leave a comment

Posted on by admin in the "The Course" category

Last week Stuart from Calida International Properties, finally found the time for a round of golf. He sent us this report, sure to make any owners languishing in the rainy UK jealous!

We were very fortunate to be joined by Mark Jones, Wales and Llanelli Scarlets number 14, for a game of golf this week. Also joining us to make up a four ball was Gary Conroy, PE teacher from Manchester.

Mark was over for a well earned rest after a very busy and very successful 6 nations campaign where Wales won the Grand Slam. Gary was over checking progress on his phase 3, part B penthouse apartment. (We could have sent him pictures if he'd asked!..but then he'd have missed the golf ;)

Mark was playing off a lowly 24 handicap, where Gary was playing off 5. I knew early on, I had my hands full in this stableford competition with these two very competitive characters; I later found out that Gary used to play semi-pro football as well.

Both Mark and Gary played some superb golf, my own not faring too well unfortunately, especially as I am off 15 and have been playing quite well recently.

Mark won the front nine comfortably and we were never able to catch him, Gary as you would expect played some quite stunning shots, the highlight being a 45 yard bunker shot which stopped "stone dead" next to the flag on the second bounce, for a tremendous birdie, show off!

This was the first time that Mark had played the Roda golf course (you could have fooled me) and the first time to pick up his clubs for 6 months, Gary being an owner has played a few times. It was a fantastic afternoon, the weather was beautiful, right up to the time when we walked off the course at about 8.15pm. Mark won the competition by some margin with some great golf shots, coming off the course with a very creditable 37 points. Gary, playing with rental clubs, finished in last place, but I have been sworn to secrecy about his stableford points, hmmm!

Both Mark and Gary were very impressed with the condition of the golf course. The lakes and fountains were fantastic and provided a real test, particularly when the wind was up, the greens were as fast as I have seen them, and the fairways were in superb "nick". Most of the bunkers were raked, and were immaculate around the edges and the whole golf course is maturing beautifully.

If there was one complaint, we did notice that pitch marks on the greens were not being repaired, c'mon everybody, let's make an effort to keep the greens nice and tidy for all fellow golfers, please adhere to etiquette and local rules at all times, especially slow play, you are supposed to be directly behind the golfers in front of you, not directly in front of the golfers behind you.

Overall, a fantastic afternoon, great golf course and awesome company, thanks Mark and Gary, will get you next time Mark! A huge "thumbs up" from everybody for the Roda Golf and Beach Resort.

Posted on 3rd Apr, 2008 by admin in the "Interviews Sports" category

Celebrity news, Look who we bumped in to at Roda Golf today, you Welsh owners and rugby fans out there will recognise Mark Jones, the Llanelli Scarlets and one of this season's Wales 6 nations Grand Slam winners! Read the full article, with big picture Read this article, and optionally leave a comment

Posted on by admin in the "Interviews Sports" category 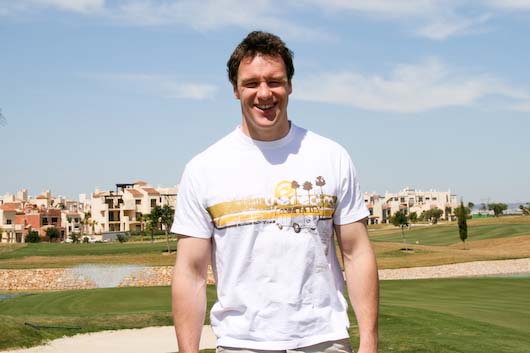 Celebrity news! Look who we bumped in to at Roda Golf today, you Welsh owners and rugby fans out there will recognise Mark Jones, the Llanelli Scarlets and one of this season's Wales 6 nations Grand Slam winners!

The number 14 for Wales was enjoying a much deserved vacation at the Roda Golf and Beach Resort with his wife Helen, fresh from celebrating the Grand Slam win over France just a couple of weeks ago. Well done Mark and congratulations from the Roda Golf Info team!

This was Mark and Helen's first visit to Roda Golf for over 12 months and they thought it was fantastic, they were both very impressed with the progress at Roda Golf and Mark told us, he thought the new Roda Golf clubhouse and PGA academy facilities were just sensational, we even caught him hitting a few balls on the range, good to see you Mark and thanks for your time today, come back and visit soon.

We are proud to be part of the Calida International Properties family of websites! With their ongoing support we're able to

bring you the latest news from Roda Golf. Please remember that Calida International Properties are the name to trust when considering your special purchase!

We divide our Roda Golf news into different categories for your convenience. Either browse all our news, or jump directly to a category of your choice: